Christianity And Politics: Is The Church Breaking Apart?

The evangelical church is breaking apart. So says lifelong political consultant (and evangelical himself) Peter Wehner in a recent article in the Atlantic.

Wehner cites dozens of examples just from this year alone of evangelical pastors, thought-leaders, and academics who have found themselves in the cross-fire of fierce, antagonistic attacks from fellow Christians, almost exclusively in the arena of political ideas. 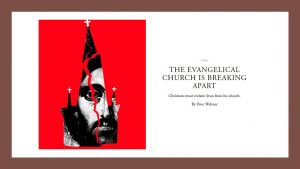 Pastors across the country are burning out or quitting under the pressure. One pastor Wehner interviewed said pastors “…have concluded that their church has become a hostile work environment where at any moment they may be blasted, slandered, and demeaned in disrespectful and angry ways.”

Even though in our church in Maryland we have done a fair job inoculating our church from this distemper, still we have experienced intense flareups from members, especially in relation to our messaging related to the pandemic. Tweak our mask policy too liberally or too stringently, our leadership is sure to hear about it, and not always in civil fashion.

Obviously, Covid-19 created a flashpoint for this rise in vitriolic behavior in the wider church, but Wehner argues that the set-up for it came much earlier.

“The pandemic exposed and exacerbated weaknesses and vulnerabilities, habits of mind and heart, that already existed. The root of the discord lies in the fact that many Christians have embraced the worst aspects of our culture and our politics.”

While Christians have been heavily involved in politics since the 1980s, up till the presidency of Donald Trump, the church “abided by some civil restraint”. With Trump, this changed. Wehner quotes historian George Marsden who observes that many Christian followers of Trump “have come to see a gospel of hatreds, resentments, vilifications, put-downs, and insults as expressions of their Christianity, for which they too should be willing to fight.”

“Many Christians have embraced the worst aspects of our culture and our politics.” – Peter Wehner

How could this have happened, that so many who claim to follow the One who taught the love of enemies, and modeled a life of grace, forgiveness and compassion for all, should so swiftly embrace ‘the worst aspects of culture’?

Wehner quotes James Ernest, an executive from the evangelical publishing company Eerdmans, who says, “What we’re seeing is a massive discipleship failure.” Translation: the Church has not taught its people well.

How Did This Happen?

Part of the problem lies with the average Christian in the pews. Because of the proliferation of media and social media technologies, a person can digest news curated just for their tribe. Articles telling us “Jen Psaki SCHOOLS A Fox News Reporter” or “Ben Shapiro DESTROYS Don Lemon” pop up on our Facebook or Flipboard, and we can feed our minds for hours on it.

Meanwhile we may manage an hour or two a week between church and our devotions contemplating Scripture. How can a person possibly learn to think biblically and theologically against those odds? It’s not surprising then to find that more people will make their spiritual convictions mesh with their political convictions rather than the other way around. We succumb to the “idolatry of politics,” says Washington state pastor Scott Dudley. “We have forgotten the cross.”

But part of the problem lies squarely on the Church. For starters, evangelical churches are notoriously anti-institutional, says Wehner, quoting Pastor Tim Keller. The average congregation is poorly connected to larger groups, leaving it without accountability, and therefore vulnerable to the whims of a celebrity-pastor, or pop-theology that might lead it astray.

But the larger problem is a lack of “catechesis” – or doctrinal instruction. Wehner quotes Dudley again, who says, “We have failed not only to teach people the whole of scripture, but we have also failed to help them think biblically. We have failed to teach them that sometimes scripture is most useful when it doesn’t say what we want it to say, because then it is correcting us.”

What Would Discipleship That Could Fix This Look Like?

What would a specific catechesis look like that would provide a course-correction for the current troubles the evangelical church is in? I suggest it would include the following:

All of this study could simply be done with an open Bible in one’s lap.

But beyond this, we would encourage a broader study of what might be called a theology of politics (that would involve a cultural and historical analysis of the relationship between Church and State). 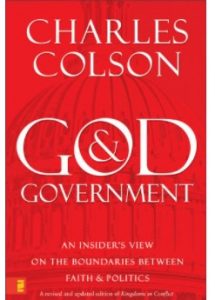 Part of the inoculation we provided our church last fall was a careful reading of Chuck Colson’s magnum opus God and Government. Colson was convicted for his role in Watergate, and converted to Christianity while in prison. It was no conversion of convenience. He devoted the remaining 37 years of his life to serving Christ, especially through his forming of Prison Fellowship, an international ministry devoted to caring for the incarcerated.

Though he died in 2012, he saw the approaching tumult of our age, and wrote of it in God And Government, where he warns with prophetic insight of what would happen if the Church began to forsake the gospel for politics.

Colson’s thesis is that followers of Christ as citizens of this world have a duty to be involved in politics, as part of their stewardship to advance goodness and justice on the earth. But we are to steer between privatized faith (which shuns political engagement) and politicized faith (such as we see today in various expressions of ‘Christian Nationalism’), and the safest way to do this is by reminding ourselves frequently of:

Other resources are available today to help us address this discipleship failure in the Church. One of our members recently read and recommends the book, Just Thinking: About The State, by Darrell Harrison and Virgil Walker. Peter Wehner has a new book which I’ve just started reading, The Death of Politics which looks promising. And I recently heard about a multi-week course circulating around the country called Biblical Citizenship created by Rick Green, which I want to review. (It’s too early to give it a thumbs-up or thumbs-down.) But the fact that more and more Christians are having these conversations is highly encouraging and speaks to me of hope for the days ahead.

Hope that maybe even if the evangelical church fractutres, the Lord’s Church won’t be breaking apart after all.