I hadn’t intended on watching TV for most of the morning, but then saw as I was looking for a weather forecast that President George H.W. Bush’s funeral was being broadcast. Two-and-half hours later, I still don’t know how much rain is going to fall today. But my soul is enriched and my sense of civic duty has been bolstered by what I just saw.

I can’t suggest strongly enough that if you missed it, you take the time to watch what you can of this moving and majestic service. Yes, watch a funeral. You’ll be better for it.

First, because it was a tribute to history. 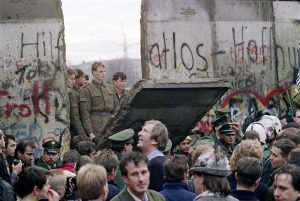 Those who think there are no greater causes to fight for than what happens on NFL sidelines and in public restrooms would do well to revisit the world just a generation ago, when George Bush, Sr. became the 41st president.

I remember when the Berlin Wall fell. We all held our breath as it was dismantled brick by brick, waiting to see the tanks and soldiers appear to stop it. Then to realize that no order was coming from Moscow. And the future suddenly opened up like holes in that awful wall for millions of citizens trapped behind it.

I remember when Saddam Hussein invaded Kuwait, and President Bush drew a line in the sand against him, then used his extraordinary diplomatic gifts to organize a massive international coalition against Iraq’s dictator. I remember when Operation Desert Storm began, when the phrase “shock and awe” was more than a football metaphor, and no one really knew how it all would shake out.

Protestors who today accost the elderly in Seattle streets and pound on the Supreme Court doors and throw the word “Nazi” around like rice at a wedding would do well to gain some perspective that only history can provide.

It was a tribute to family.

Who isn’t touched and inspired by the legendary love story of George and Barbara Bush, whose 73 year marriage endured devastating heartache (the death of a daughter Robin to cancer), and unimaginable challenges from a life lived in politics.

His son, the 43rd president George, was never a heart-warming speaker, but there wasn’t a dry eye left in the National Cathedral as he finished his eulogy with the words: “And in our grief, let us smile knowing that Dad is hugging Robin and holding Mom’s hand again.”

It was a tribute to service.

There was something fitting, even poetic, that President Bush’s funeral comes during one of the most divisive chapters in our nation’s civic life.

No speaker mentioned it directly, but Bush’s very life and integrity was a rebuke to the ugliness of our times (though John Meacham came close with a line about how “a wall fell in Berlin” during the Bush presidency.)

More than once, the words “humble” and “honorable” were used in praise of Bush’s character. “Those who travel the high road of humility are not bothered by heavy traffic,” said former senator and Bush friend Alan Simpson. I had to laugh as I looked on the faces of Presidents Trump, Obama and Clinton – three of least-humble occupants of the Oval Office ever – as they took this in.

It also serves as a reminder to Christians that we don’t have to gush unthinkingly over politicians who support policies we agree with, while conducting themselves in disagreeable ways. We can praise with one hand, and rebuke (“You are the man!”) with the other. We don’t have to settle for competency or honor. We can demand both.

It was a tribute to beauty and art. 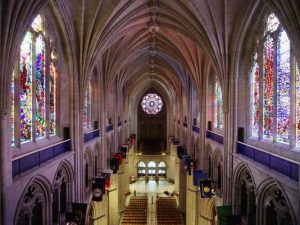 The service was a celebration of the artistic excellence that we humans – created in the image of God – can produce.

From the soaring steeples and vaulted ceiling of the cathedral itself, echoing the heavenly blend of children and adult choirs, singing majestic hymns perfect in lyric and composition, accompanied by organ and orchestral tones that would cause angels themselves to pause and listen – what a feast for the eyes and ears this service offered.

How moving it was to hear Michael W. Smith sing his classic song “Friends”, then moments later, Ronan Tynon (of Irish-tenor fame) fill the sanctuary with the incomparable “The Lord’s Prayer”.  Listen to those, and tell me there’s no God. Speaking of which…

It was a tribute to our need for God.

It was after all, a funeral. So there’s no getting around the fact that when we attend a funeral, and we hear the bells toll, we are hearing those bells toll for thee (as John Donne said.) And it doesn’t matter if you die at 3, as George and Barbara’s daughter Robin did, or die at 94, as George did, if in the end you just die.

Nothing speaks to our hearts of our need for God, and nothing gets to the marrow of the real purpose for our lives, than watching – purposefully watching – the funeral of a follower of Jesus Christ.

Because of the Episcopal liturgy, and the obvious faith of some of the attending clergy, the name of Jesus resounded through that temple over and over again during those two-and-a-half hours. (Though I could have done without the mangling of John 11:25 – Jesus did not say, “I am resurrection; I am life”. He said, “I am the resurrection and the life.” Get the preposition right, thank you very much.)

The only hope that President Bush is now in the presence of his daughter and wife rests in the fact that Jesus Christ is the resurrection and the life.

The greatest explanation for the character of President Bush (who, according to George W., “in victory, he shared credit; when he lost, he shouldered the blame; he accepted that failure is a part of living a full life, but taught us never to be defined by failure…”) is the fact that Jesus Christ is the resurrection and the life.

The reason why President Bush could summon the nation to serve, by letting shine a thousand points of light, is because Jesus Christ is the resurrection and the life.

It’s not every day you receive such a powerful reminder of what life is about. It’s a good thing I was flipping channels this morning.