Soaring On The Wings Of A Nightbirde

Part of the adventure of life is meeting new souls who enrich your own, and yesterday I “met” for the first time Jane Marczewski, a vibrant, 30-year-old, singer, artist, and follower of Christ. I learned of her when they announced her recent death from cancer on the news last night.

She adopted the stage name of Nightbirde after she was first diagnosed in 2017, and chose the name because of a recurring dream of birds singing in darkness. “It felt so poetic that these birds were singing as if it were morning,” she wrote, “and yet there was no sign of it yet, and that’s what I want to embody.”

It was with that name, and that spirit, that she captured the world’s heart with a moving audition on the show America’s Got Talent last summer. When I watched the recording last night for the first time, my tears were about eight months behind the tens of millions whom she left marveling and weeping the first time around. 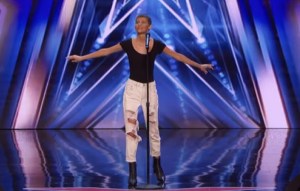 “It’s important for people to know that I’m so much more than the bad things that happen to me,” she said before singing an original song, “It’s Okay”, with her arms held out like a bird in flight, smiling with a peace and honesty that shattered me (and Simon Cowell, as well.)

“You can’t wait until life isn’t hard anymore before you decide to be happy,” she said afterwards.

That had to be Jesus shining through her, I thought, and quickly confirmed that she was one of His, with an internet search, which took me to a simple website where she chronicles her story, songs, and a handful of blog posts.

In a haunting post called “God Is On The Bathroom Floor” from March 9, 2021, I learned three things about her: the enormity of her sufferings, the honesty of her faith, and the depth of her artistry.

After the doctor told me I was dying, and after the man I married said he didn’t love me anymore, I chased a miracle in California and sixteen weeks later, I got it. The cancer was gone. But when my brain caught up with it all, something broke. I later found out that all the tragedy at once had caused a physical head trauma, and my brain was sending false signals of excruciating pain and panic.

I spent three months propped against the wall. On nights that I could not sleep, I laid in the tub like an insect, staring at my reflection in the shower knob. I vomited until I was hollow. I rolled up under my robe on the tile. The bathroom floor became my place to hide, where I could scream and be ugly; where I could sob and spit and eventually doze off, happy to be asleep, even with my head on the toilet.

The cancer returned, then left, then returned again, each time worse than before, like a tide determined to reclaim the shore.

“You can’t wait until life isn’t hard anymore before you decide to be happy,”

But each time, she grabbed hold of whatever threads of faith and hope she could find. Like Job, she refused to turn from God, but instead sought him all the harder, yet with the same brutal honesty of a King David in Psalm 22, or Jesus crying out from the Cross.

I am God’s downstairs neighbor, banging on the ceiling with a broomstick. I show up at His door every day. Sometimes with songs, sometimes with curses. Sometimes apologies, gifts, questions, demands. Sometimes I use my key under the mat to let myself in. Other times, I sulk outside until He opens the door to me Himself.

I have called Him a cheat and a liar, and I meant it. I have told Him I wanted to die, and I meant it. Tears have become the only prayer I know. Prayers roll over my nostrils and drip down my forearms. They fall to the ground as I reach for Him. These are the prayers I repeat night and day; sunrise, sunset.

Call me bitter if you want to—that’s fair. Count me among the angry, the cynical, the offended, the hardened. But count me also among the friends of God. For I have seen Him in rare form. I have felt His exhale, laid in His shadow, squinted to read the message He wrote for me in the grout: “I’m sad too.” 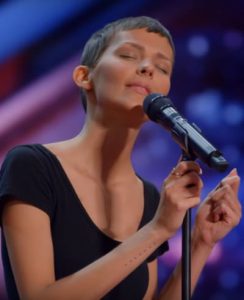 Reading Nightbirde’s words has me weeping all over again, and leaves me with no doubt that God created in this lyrical, beautiful soul a true and exceptional artist, the tragedy for the rest of us being that she was given so little time to create.

Her website is sparse. Her song catalogue is a flowerpot, never given the chance to become a garden. Clearly she tried, if you examine her short career after her graduation from Liberty University. But once the sickness grabbed hold of her, it became her life. “Night comes when no one can work,” the Lord said, referring to such seasons. Even after her triumph on AGT, she was unable to perform again in the competition because of her illness.

Her destiny was to fulfill Walt Whitman’s famous line about where one can find meaning in a life that appears so often empty and useless: That the powerful play goes on, and you may contribute a verse.

And Jane Marczewski contributed a mighty verse. My life is suddenly better for having heard this nightbird sing.

Now, death has brought her to her fullest healing. “The death of the Lord’s saints is precious in his sight.”  (Psalm 116) There’s a reason for that joy she exuded. She writes of it at the end of that March 9th blog.

Call me cursed, call me lost, call me scorned. But that’s not all. Call me chosen, blessed, sought-after. Call me the one who God whispers his secrets to. I am the one whose belly is filled with loaves of mercy that were hidden for me.

Even on days when I’m not so sick, sometimes I go lay on the mat in the afternoon light to listen for Him. I know it sounds crazy, and I can’t really explain it, but God is in there—even now. I have heard it said that some people can’t see God because they won’t look low enough, and it’s true.

If you can’t see him, look lower. God is on the bathroom floor.