What Dreams May Come –

Bear’s Life In A Page Or Two 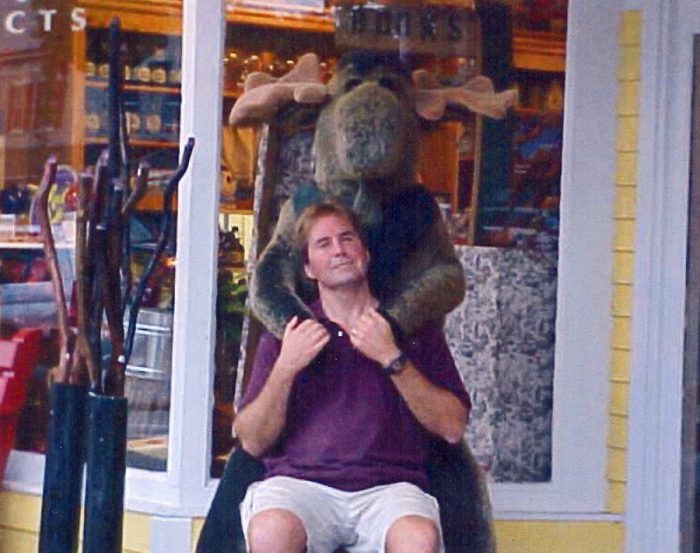 I grew up with two of the greatest gifts a child could have: a faithful father and a praying mother. 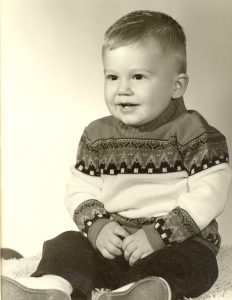 I remember being read to on my mother’s lap from an old, tattered children’s Bible that her mother had read to her. Seeing the illustrations of Jesus’ crucifixion, and listening to my mother’s simple yet profound explanation of why Jesus died filled me with awe. I can honestly say that Batman, the Green Hornet, and Jesus were the heroes of my childhood. 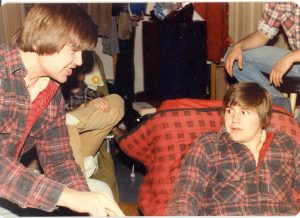 When I was eleven, I heard it explained at a Billy Graham movie that Jesus needed to be accepted as Lord and Savior by a personal decision, and I didn’t need to be told twice. I stopped playing make believe, and started to follow Christ.

I will never doubt that a child is capable of great faith, because I was that child. I still have my first Bible, given me in the third grade, and it is filled with notes and underlining. I devoured every Bible study that Billy Graham could send me.

Though I spiritually hemmed and hawed some in high school, it was while watching the classic 1959 film Ben-Hur as a freshman sitting alone in the student lounge at the University of Iowa, that I fully and finally went all in with Jesus.

I immediately got involved in several ministries on campus, and found myself leading Bible studies, playing on a worship team, being on staff of a junior high youth ministry…and found myself when I wasn’t writing papers, penning sermons on the side.

I met Janis when I got involved in a student group working to sponsor Christian concerts in the university. I 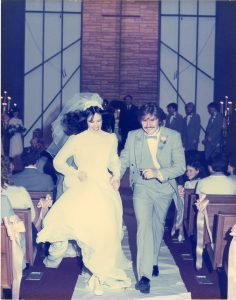 have fond memories of laughing with Larry Norman in our living room, and picking up Phil Keaggy at the airport, but my best memory is falling in love with this beautiful woman who had a heart for missions.

“You know I’m going on the mission field somewhere,” she warned me.

“Not without me,” I replied.

Three years after our wedding (and mixing in having our daughter Hannah somewhere in there), we went to London, England to serve for a year in an inner city Baptist church. (The street we were near happened to be the slum property in the British version of Monopoly.)

Though I had fully intended on pursuing a career in journalism, it was during that year in London (Peckham) that I knew I would never da 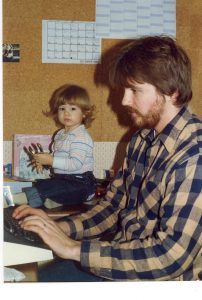 rken the doors of a newsroom. Before the year was out, I enrolled at Gordon-Conwell Seminary, and two years later, took my first pastorate at a country church in the Swedish hamlet of Dalbo, Minnesota while I finished up school at Bethel Seminary. Those sermons I had written earlier ended up coming in handy.

Sermons weren’t the only thing I was writing. While studying 1st-century Christianity, the idea of a sequel to the Ben-Hur story gradually took shape in my heart. When the movie ended, the fictional Judah Ben-Hur was yet a young man, and had obviously become a follower of Christ. What happened next? I wondered.

Over the course of my 5-year pastorate in Minnesota, I began to slowly develop the story, first by writing a screenplay, then by pecking away at what became a 400-page novel which I finis 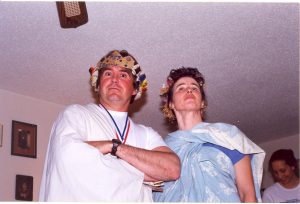 hed in the early years of my second pastorate in Bristol, Connecticut.

Without even knowing what I was doing, I landed agents for both the screenplay and book, and was soon in a full correspondence with Charlton Heston himself. The project came very close on all fronts. But then Mr. Heston got sick, Gladiator came out and sucked the air out of “sword & sandal” movies, and just like that, the window closed. Figuring my flirtation with Hollywood and with writing was over, I plunged back into being a pastor.

But I had written stories and dreamed up movie and TV series plots since I was a boy, and that bug, or pathology, or whatever it is, kept worming its way up and nagging me.  (Case in point: in the 7th grade after a 21-inch blizzard buried our home near Chicago, I proceeded to hand write out in notebooks a 150 page screenplay, then a 200 page novel of a story I called Deep Freeze about a 30-foot snowstorm that wipes out the Upper Midwest.) 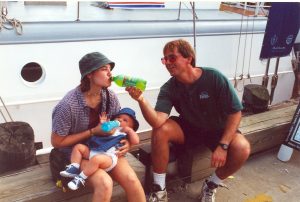 When I took a three-month sabbatical several years later, what did I do? I cranked out the first draft of a 300-page novel called A Sparrow Could Fall, based on events that happened in my Minnesota church. During a month of vacation a few years later, I revisited that story of the snowstorm, and wrote out from scratch a new and improved 120-page screenplay which on a whim, I sent off to a couple screenwriting contests. Meanwhile the story ideas kept coming.

Our daughter moved to LA in 2012, and with every vacation out there we took to see Hannah, I would try to connect with professionals in the industry, and I’d ask each one, “If I wanted to write for Hollywood, do I have to be in Hollywood,” and every time the answer was a robust Yes!

Slowly the tug to head West 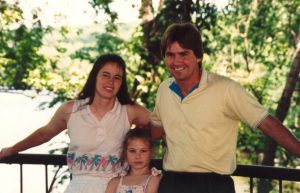 built inside my heart, and then an even crazier idea came to mind: sell everything, step down from ministry and move west for a season, then write my little heart out.

“Don’t you want to write?” I sensed God saying one afternoon as I drove down the 101 north of Hollywood. “Doesn’t this sound like fun?”

I burst out loud, “No! It sounds stupid!”, no doubt causing a pile-up behind me.

As I bargained with God, I asked him for a “fleece”. “If this is you, then I want to be a finalist in one of those scre 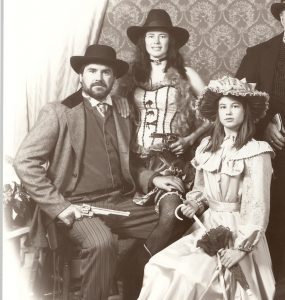 enplay contests,” I prayed, never believing it would happen. Till an email arrived a couple months later, congratulating me that my screenplay Deep Freeze was a finalist in the Big Break Final Draft contest. The next morning, God cleared his throat over my head, and I knew what I would have to do.

Right after Easter of 2016, I announced to the wonderful congregation I had served for the past 20 years that I was stepping down, we were selling our house, and with nothing firm in place, were moving west to be near Hannah, write, and wait upon God for further instructions.

A few weeks after we settled in after the move, Janis woke up one morning in agony. She had aggravated a back injury, which prevented her from sitting, driving and working for the next three months. I had preached it for years, that there’s always a Red Sea we must face (i.e. tests and trials to strengthen our faith). But living it out at our point of greatest vulnerability with no community around us was another story. 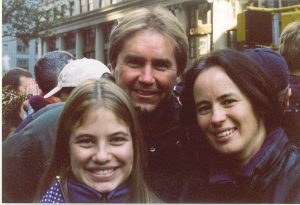 But while she healed, I went to work on my writing projects. Hollywood rebooted Ben-Hur and it was “supposed” to make $100 million and have Hollywood rolling out the red carpet for my sequel. Instead, the movie was a total disaster. (What’s that they say: If you wanna make God laugh, tell him your plans.)

But there were multiple projects lined up on the runway of my imagination. One encouragement during t 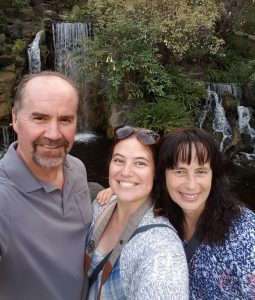 Over the course of the next couple of years, I cranked out a rewrite of “A Sparrow Could Fall”, then wrote a feature-length movie screenplay of the story, then took three months to write Train Yourself To Be Godly, which became the catalyst for this ministry. I also developed five hour-long spec scripts for a prospective TV series called Tinkerville inspired by It’s A Wonderful Life. (My scripts are all posted online at my writing website, blclifton.com.)

Now new chapters await us. God promised us that he would open up new doors for ministry at the right place and right time. And in November 2019 I accepted the call to come to Hollywood, California……..Maryland to become the new pastor of Bridgeway Community Church. (Don’t tell me God doesn’t have a sense of humor!) Janis and I love the East Coast, and this young, growing church – an hour southeast of Washington D.C. – has incredible potential to have impact for Jesus.

What will come of the writing, the ministry, the hopes and dreams? I have no idea. But I know somebody, a big Somebody, who does.

Let’s journey together and see what dreams may come.